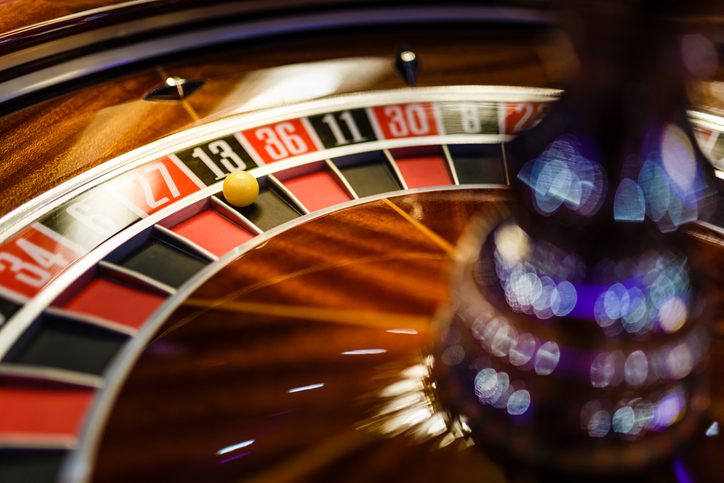 Roulette has always been regarded as one of the classiest games in the casino, but what a lot of players don’t appreciate is the math behind it. There’s a lot more to roulette as a game than meets the eye, and understanding how it works could be the difference between you making money on it or not.

Read on as we dive into everything you could possibly need to know about how a roulette wheel works, how it’s laid out and the main differences between the two different sets of rules of roulette – American vs European.

How a Roulette Wheel Works

In the game of roulette, the dealer (known often as the ‘croupier’) places the ball onto the wheel as it spins in one direction. The ball then rolls in the opposite direction alongside a track, using centrifugal force to stay spinning.

After the ball begins to lose momentum, it starts to head down towards the table. Eventually, it drops into one of 36 numbers (half of them red, half of them black, bar one or two green zeros).

Players can bet on a specific number, a group of numbers (low red, high black etc.) or simply odd or even, which is a near on 50–50 chance of a win.

The roulette wheel itself is a staple part of casino culture and is certainly one of the most impressive attractions within a casino as well.

Another interesting aspect to learn about is how a roulette wheel is made. It’s actually beautifully crafted out of wood – often mahogany. The process of making one is quite a spectacle.

The main difference between the rules of the American vs European games is the roulette wheel blank, or the number zero. In European roulette, there is just the one, whereas, in the American version of the game, there are two zeros on opposite sides of the wheel.

Believe it or not, this difference can completely change the dynamic of the game. Some players swear by European roulette because the lower number of zeros increases the chances of certain bet groups, such as odd vs even. However, American roulette players prefer their version of the game because it allows them to play by different tactics.

You can bet on the following if you are playing American-style roulette:

European roulette offers the same bet types for the most part. However, as there is only one less zero to play with, the odds of each bet is different when compared to the American game. As a result, players are going to want to play with different tactics.

Can you predict a roulette wheel? Probably not. But a lot of players seem to think that there is more to it than meets the eye, especially if the diamonds are taken into consideration.

Some punters throughout history have found themselves wondering ‘is the roulette wheel rigged?’ The short answer is no. However, there are some roulette wheel best numbers that tend to pop up again and again.

The red seven is the main one of those. It’s somewhat of a legend that red seven is the most popular roulette number, and that’s where we get the phrase ‘lucky seven’ from. This is also one of the symbols in Charles Fey’s famous Liberty Bell slot machine, and you will continue to see it on numerous slot machines around the world to this day.

How to Win on the Roulette Wheel

Learning the ins and outs of how to use the roulette wheel is basically part of the process of learning how to play roulette itself. If you’re going to be spending your money on bets then this is crucial.

Remember, learn which types of bets are best for either American or European roulette, and learn which are the riskier types. With these in mind, you’re ready to get betting.

Tags:
How To Play