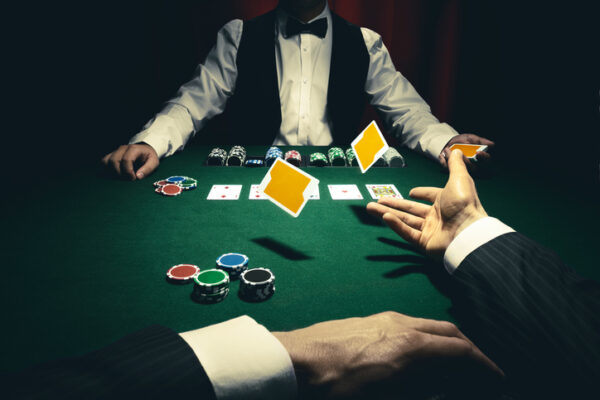 Among all the casino jargon, the term ‘house edge’ comes up a great deal. It’s one of the most important when playing for real money. Basically, this is the advantage that a casino has over players’ bets per game.

But what does the house edge mean for players? It has a direct relationship with your odds and chances of winning. This is precisely why it’s crucial to understand this concept before you engage in real-money play at the casino.

This article will help you understand in a more detailed manner the meaning of the house edge. You’ll also learn how to calculate it, and how to use this knowledge in your favor.

The house edge is what the casino stands to gain every game you play. However, this is better understood as a long-run concept, where players’ wins and losses are more or less equal.

Contrary to some opinions, the house edge is not a manipulative tactic by the casino to cheat players. It’s simply a mathematical advantage built into these gambling games. When you think about it, casinos have to profit to keep operating. And considering that casino gambling is predominantly a random affair, they don’t simply bank on players’ losses. Thanks to the house edge, they can stay afloat.

To understand the payout percentage, you can simply take the house edge meaning and flip it over.

The payout percentage is defined as how much a game will pay players in winnings over time. Just like the house edge, it’s a percentage of players’ wagers, and both add up to 100%.

Therefore, a game with a casino advantage of 1% has a payout percentage of 99% and vice versa.

DOES HOUSE EDGE VARY BY GAME?

We’ve gone through the basics of this casino concept, but an interesting fact is that the house edge isn’t a single unchanging value. Instead, it varies from one game to another. Some games have a high house edge percentage, while others can have much lower values.

In fact, different variants of the same game also have differing house edge values. Why? The casino’s advantage is influenced by many factors: the number of card decks, the bet types, the strategy used, etc.

Let’s take a look at the house edge by game.

The house edge in Blackjack is about 0.5%. This applies to the classic game version when played with the basic blackjack strategy, which tells you the best move to make for every hand you’re dealt.

An even lower house edge with perfect blackjack strategy is obtainable on Atlantic City Blackjack (0.36%) or Blackjack Switch (~0.16%). Note that without basic strategy, the casino’s advantage could go as high as 2%.

Roulette games are probably the most populated table games at the casino. There are many variations with distinct rule changes, and each one has its own predetermined advantage for the casino. Here are the house edge gambling percentages for the most common roulette games:

These values apply to even-money bets alone. You may want to run through the different house edge percentages before you begin trying riskier wagering options.

The player base of this game is one of the largest among all casino games. Luckily for fans, it also has reasonably low house edge percentages. Here are the values on different variants:

The best house edge in baccarat is 1.06% on the banker bet. Second in line is the player bet at 1.24%. The third betting option in this game is the tie bet. It comes with a much higher advantage for the casino at 14.36%.

For starters, the house edge on slots is expressed in its reverse form (payout percentage). More prominently, it’s referred to as RTP or Return to Player.

Jackpot games also feature a house edge. However, it gets a little tricky. Usually, the casino’s advantage is measured based on your bets on a particular game. However, with jackpot games, a portion of the house edge goes to the pot.

For instance, on a progressive slot with a 96% RTP, your regular wins may reflect about a 90% payback rate – in which case, the remaining 6% would be tied to the very slim chances of being the lucky player to win the prize.

That’s why it’s advisable to play these games only if you’re interested in trying for the jackpot, as the returns on regular wins would be lower than expected.

HOW TO CALCULATE HOUSE EDGE

Doing the math behind your favorite games is a good idea to maximize your gameplay and optimize any strategy you may have up your sleeve. If you’re looking for how to calculate the house edge in blackjack, the answer is a house edge blackjack calculator. You can find these online – they work out the percentage value depending on the rules at play in the particular table.

However, for certain games such as roulette, you don’t need a house edge calculator to see how the casino’s advantage arises.

Here’s how to calculate the house edge in roulette bets.

For example, taking a game of European Roulette, there are 37 pockets on the wheel – 0 and numbers 1-36.

Placing a single number bet, you can pick numbers 1-36. However, the zero is not accounted for, and that is a 1 in 37 (2.70%) chance of always losing each wager. That loophole is precisely how the casino one-ups players on this game.

On the contrary, you can’t decipher the house edge on sports betting or other forms of gambling. You simply shop for the best odds and bet on those.

The same goes for slots. The only way to decipher the house edge on a slot machine would be if you were to simulate 100,000 or 1,000,000 spins. The larger the sample spins, the closer you get to the theoretical payout percentage value.

Fortunately, there’s no need to go through the hassle. If you’re looking for how to find the house edge on your preferred game, a quick Google search should do the job. Some casinos may even list the payback rates of the games on their site.

You may assume that there isn’t a house edge on successful bets, but that’s not the case.

Obviously, when you lose, your whole bet goes to the casino. However, the house edge applies even when you win because your payout is usually less than the true odds.

Statistically, with European roulette, you should have one chance of winning and 36 chances of losing. However, the payout is given as 35:1. This means that you would earn $35 for every $1 bet instead of $36. So, the payout odds are less than the true odds. Although you win, you’re not earning as much as you should for the risk involved.

The same applies to blackjack and other games.

The payout percentage mentioned earlier tells you how much you stand to gain. You can think of it as the expected profits or expected value inherent in the game. Once again, this is best measured in the long run over a series of bets.

On the other hand, the house edge determines the negative expected value during a gaming session.

Although less common, ‘hold’ is another casino term with a connection to the house advantage.

It’s given mathematically as: Amount Won/Amount Dropped (in bets).

WHY IS IT IMPORTANT TO UNDERSTAND HOUSE EDGE?

Even if you’re not seeking to join the big league, you still need to understand the house edge to rake in profits. Clearly, the house edge tells you the expected average payout of a game. However, for players, this also lets you know which games will be most profitable.

For instance, the house edge values on roulette bets indicate which ones have better winning odds. The same goes for baccarat bets and craps bets.

It’s easy to deduce that the lower the house edge, the more favorable for players and vice versa. So, if you’re looking to maximize profits, you should always target low house edge casino games – or in the case of slots, higher RTPs.